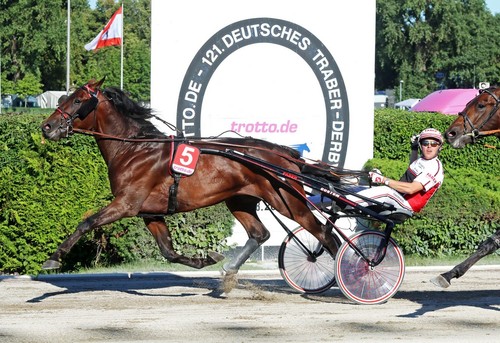 09-08-2016
Last weekend, Robin Baker (trained by Paul Hagoort) won the prestigious Deutsche Traber-Derby for the third time in his career! Robin also managed to sharpen the course record with Muscle Trott to 1: 12.5 over 1900 meters on the track  of Berlin-Mariendorf. The prize-money amounted to € 132,846.
Robin Baker won the German Trotting-Derby already in 2013 and 2015, and his trainer Paul Hagoort already achieved four Derby victories. Muscle Scott is a son of Muscle Mass and What a spirit.

On Saturday there was also success for another HAVENS customer; as Dion Tesselaar with Gilda Newport won the German Mare Derby.

Congratulations on this great success!